There will be only one (1) castle for each server cluster
Move to Lorencia (239, 13) to enter the Loren Canyon
There are no restrictions for entering Loren canyon.
Loren valley is a PVP enabled area.
During Siege you can attack other participants without pressing Ctrl.
No items that should drop from resulting PK status will drop from participants during the siege event.

How to register for a siege

Qualified guilds must talk to the Guardsman NPC and press the "Announce" button and their registration will be accepted.
Only the guild master of the main alliance can announce intent to siege to the guardsman NPC.
Any guild members of the guilds that have announced intent to siege can submit a Mark of Lord during the registration period.
When the guardsman NPC is clicked, the guild name and allied guilds names rankings will show on the registry.
When the guard NPC is clicked Siege status information will be shown.
Only the top 3 guilds and their allies will be given a priority for the siege. 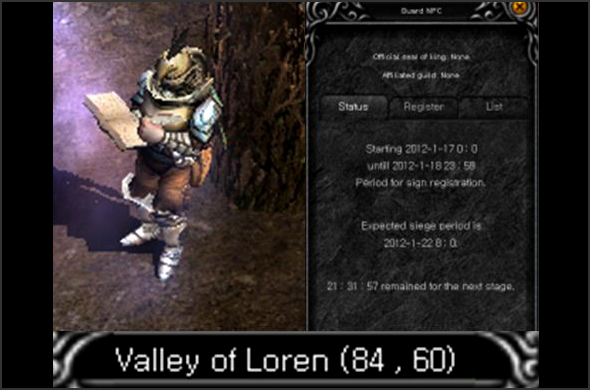 Registration Ranking = (Number of registered Mark of Lord * 5) + Number of Guild Members) + Level of Guild master /4 Siege Status.
Siege Registration Announcement  Time for guilds to announce their intentions to attack the castle.
Registration period  Time to bid for the top 3 slots for the siege by using Sign of Lord to enhance their ranking.
Announcement of Qualified guilds announces guilds that have been accepted into the guild siege.
Siege Start  Starting time for siege.

Note: Players can get a Mark of Lord through hunting any monsters.

When the guild of a registrant is selected, the invading team and their allies will have a sword icon and defending and their allies will have a shield icon.
PK penalty do not apply between the guilds of the invading and defending team.
The above condition is applicable to the Loren Valley only
PK penalty will not be applied to both invading team and defending teams but will be applicable to other characters who are not participants.
The Guild Masters will have a crown mark on the top instead of sword or shield mark.
Neutral characters will not be marked as attackers or defenders.
Guild registration/withdrawal during the battle is not allowed.

1. Basic Policy and Winning condition
The union under the invading/defending team will automatically included to each invading/defending team.
Attacking own troops is only possible by pressing Ctrl key.
Range attack can give 80% reduced damage to the own troops and 60% reduced damage for the other troops.
To win the siege the guild master's official seal should be registered in the pedestal located at the dragon tower and if it succeeds the lord of a castle will be changed.
Only the guild master can stamp the official seal in pedestal.
To stamp press it for 30 seconds and if the 2 foot holders that are needed for stamping is cancelled or the character gets killed the stamping will fail.
If there's a remaining time even if the stamping was successful, the battle will continue but the

2 camps of invading/defending team will be exchanged.
The guild with their official seal stamped at the end of the siege will be the lord of a castle

Warping in Loren
The guild that owns the castle (including united guild) can warp through Loren canyon to go the castle.
Warp command cannot be used during the Siege Warfare but the defending team can warp if front of the castle by using "Town portal scroll".

For the guild members of invading/defending teams, there's a display of the siege status (mini map) at the lower right side of their screen. 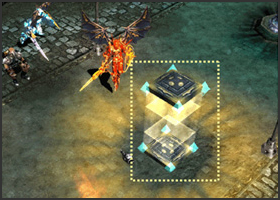 When the invading team's character gets killed,he will respond from the life stone and not from the outside of castle. 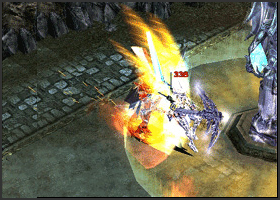 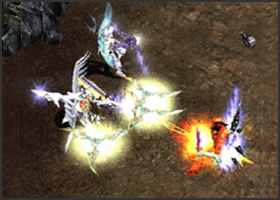 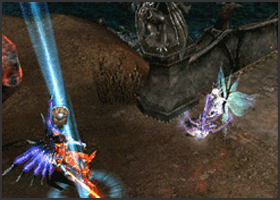 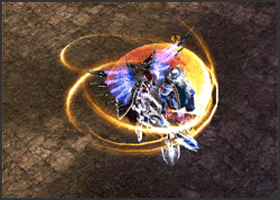 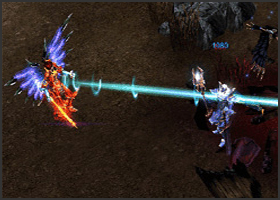 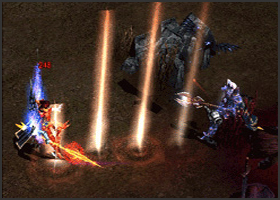 The castle gates are divided into 3 parts; with an outer part, a middle part, and an inner part It is possible to penetrate the castle even if only one gate is destroyed.

Destroy 4 Guardian statues to proceed to the Dragon tower. 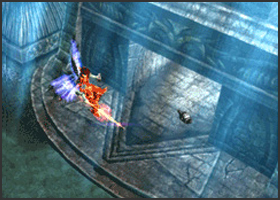 The entrance to the Dragon tower is protected by the shield which the invading team's forces.

To penetrate the Dragon tower all 4 Guardian statues need to be destroyed.

The lord of the castle can collect the taxes from using the stores and other systems operated by the corresponding cluster. Adjusting tax rate and settings for castle operations is done through the senior NPC located in the Dragon tower.

Repairing/upgrading is not possible during the siege.

Tax adjustment is applicable starting from 2 hours after the siege till the next siege.

Tax will not apply during 2 hours of the siege. Lord's Mix

To check the status of the castle gate click the senior NPC.

Unselected castle gates will be displayed in gray color.

When the durability is 100% the "Repair" button will be deactivated

Cost for upgrading the castle gates

To check the status of the castle gate click the senior NPC.

Increase the abilities of guardian statue

Cost for upgrading the Guardian statue

Collected tax will be displayed at the senior NPC and only the lord of a castle can make a withdrawal.